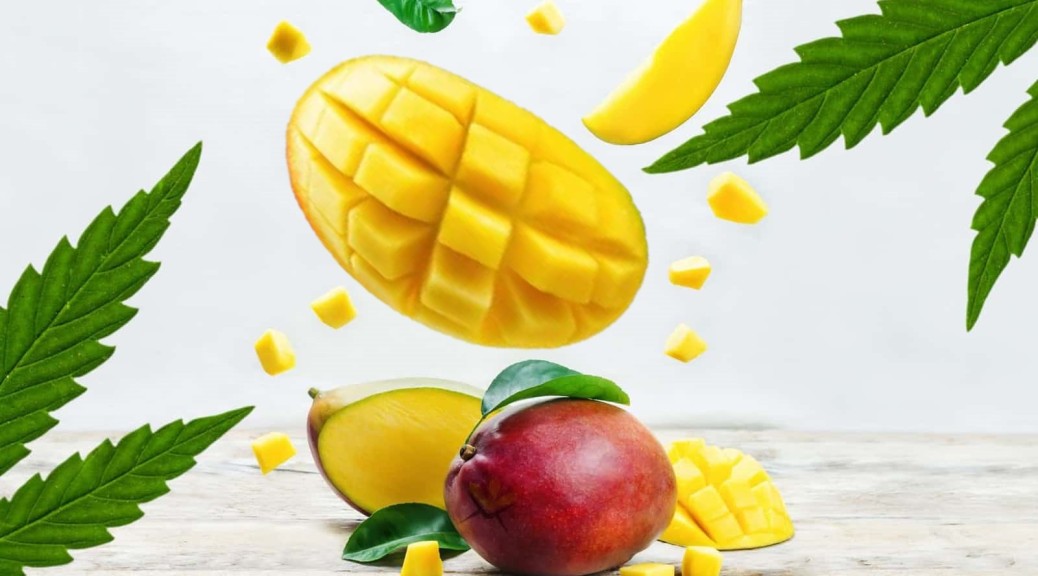 The scent is characterized by its earthy, musky, clove-like and pungent. Aside from cannabis, it can be found in basil, mangoes and other plants . The unique therapeutic effects may contribute meaningfully to the Entourage Effect. Myrcene synergizes the activities of terpenes and other compounds in a variety of ways.

Myrcene shows anxiolytic and hypnotic effects upon inhaled administration, however, hypnotic effect by oral supplementation has not been determined yet.

Myrcene analgesic and anti-inflammatory actions can be attributed to reduction of peripheral nociception by inhibition of prostaglandin release. In other words, it helps to reduce the perception of pain by helping to stimulate opioid receptor assisting in pain relief.

It appears that Myrcene lowers resistance across the blood brain barrier, improving permeability, so that β-myrcene itself and many other chemicals (including the analgesic THC) may cross the barrier more effectively.

Myrcene could inhibit the LPS-induced inflammation, including cell migration, which is a key feature of pleurisy and generally of inflammatory response. β-myrcene was found to have immunoregulatory activity, inhibiting the production of nitrogen oxide (NO), as well as cytokines Interferon gamma (IFNγ) and Interleukin-4 (IL-4), which is normally overproduced during excessive inflammation.

Shown to improve glucose tolerance in diabetics without effects on glucose level in non-diabetics. This means that myrcene can be used as preventative medicine.

It is important to understand that effective treatment for diabetes and hypertension are preliminary and need further research.

Myrcene is an organic compound with anti-mutagenic properties. It reduced the toxic and mutagenic effects of a form and reduced the medication’s ability to induce sister chromatid exchange (SCE). The abnormal occurrence of SCE is a potential marker for cancer.

Myrcene’s inhibition of the liver enzyme CYP2B1 is responsible for these anti-mutagen effects. Myrcene also mitigates DNA damage from toxins.

Myrcene has also been used for many years as a folk remedy for diabetes.

Myrcene has been found to improve immune function by inhibiting the production of nitrogen oxide in immune cells, returning elevated stress levels in the immune system to near-normal. Further research is needed to fully understand myrcene’s mechanisms and interactions.

The terpene is not classified as dangerous in unconcentrated form. The flavor poses no hazards under normal conditions of handling and usage. If misused in its concentrated form, the flavor may be harmful to health.  It is very important to know precisely the concentration for each application and delivery method.

Keep the container tightly sealed. Store in a cool, dry, secure, flammable storage area away from all sources of ignition. Protect from light, avoid uncoated metal containers, and keep air contact to a minimum. Incompatible with strong oxidizing agents, acids and bases. Avoid extended storage by using as soon as possible within designated shelf life.